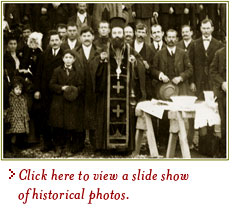 Over the past century, Holy Trinity Greek Orthodox Cathedral has grown to become one of the most vibrant and diverse Greek Orthodox communities in the United States, with a rich liturgical life, a dynamic educational program, ministries that support and build up the church community, and a variety of outreach and service endeavors within our local neighborhood, city, and region.

Holy Trinity Greek Orthodox Cathedral was founded in 1907 by the Greek immigrant community of Portland and the surrounding region, the first Greek Orthodox church to be established in the Pacific Northwest. In that same year, the groundbreaking for the original church edifice, still located at SE 17th and Taggart, took place. In 1910, work on the "old church" (also known as the "stone church") was completed. In 1951, the groundbreaking for the new church edifice at 31st and Glisan took place. Construction of the church was completed in 1952, and the church was consecrated in 1956.

In order to accommodate the growing needs of the parish, in 2003 a new church hall and community center was completed, with expanded facilities for educational, youth, and senior ministries. On October 28, 2006, this facility was dedicated as the "Fr. Elias Stephanopoulos Center" by His Eminence Metropolitan Gerasimos of San Francisco, in honor of our beloved former pastor, Fr. Elias Stephanopoulos, who reposed in the Lord while in service to Holy Trinity Church in 1995. On May 4, 2007, His Eminence Archbishop Demetrios of America dedicated the new "Hellenic-American Cultural Center," located in the "upper room" of the Fr. Stephanopoulos Center.

On May 5, 2007, during the church's "Centennial Celebration," His Eminence Metropolitan Gerasimos announced that Holy Trinity Church would be elevated to the status of "Cathedral of the Pacific Northwest." The Cathedral Elevation Service took place on October 21, 2007.

We are grateful for all God's blessings, and look forward to the next 100 years of service to Portland and the entire Pacific Northwest region.